Episode 668 of A Well-Designed Business® 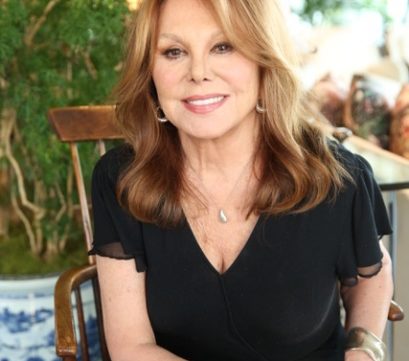 0.75x
1x
1.25x
1.5x
2x
0:00
01:15:28
Apple PodcastsGoogle PodcastsPlayer EmbedSHARE LEAVE A REVIEWListen in a New WindowDOWNLOADSoundCloudStitcherSubscribe on AndroidSubscribe via RSSSpotifyGET ON THE LIST

Welcome to a Well-Designed Business. Marlo Thomas of the hit show, That Girl, shares the story of how her father’s diligence shaped her path to success and how her mother’s graciousness inspired her own product line with Williams Sonoma. She also shares her moment of self-doubt on her way to wild success in show business and how to lead with conviction so you can make a difference.

[14:50] Marlo talks about how her father was her example of what it took to be successful

[21:00] Marlo shares how she came to call the shots for the storyline of That Girl

[27:00] LuAnn and Marlo chat about getting started with her women’s charity

[40:03] Marlo tells about when she first met her husband

Marlo Thomas is an award-winning actress, author and activist whose body of work continues to impact American entertainment and culture. She has been honored with four Emmy Awards, the Peabody, a Golden Globe and a Grammy, and has been inducted into the Broadcasting Hall of Fame. In November 2014, she was awarded the Presidential Medal of Freedom—the highest honor a civilian can receive—by President Barack Obama at a White House ceremony.

Marlo burst onto the scene as television’s That Girl, which broke new ground for independent women everywhere, and which she also conceived and produced. Her pioneering spirit continued with her creation of Free to Be…You and Me, which became a platinum album, best-selling book, Emmy Award-winning television special and a stage show. Proceeds from this project went toward the formation of the Ms. Foundation for Women, which was co-founded.

Marlo has produced eight bestselling books (three of them New York Times #1 bestsellers), including: Free to Be You and Me; Free to Be a Family; The Right Words at the Right Time (Volumes 1 and 2); Thanks and Giving: All Year Long (which became a Grammy-winning CD); her memoir, Growing Up Laughing; It Ain’t Over Till It’s Over; and in 2020, What Makes a Marriage Last, which she co-authored with her husband, talk show pioneer Phil Donahue.

For her activism, Marlo has been honored with the Helen Caldicott Award for Nuclear Disarmament; the ACLU’s Thomas Paine Award; the American Women in Radio and Television Satellite Award; the William Kunstler Racial Justice Award; The National Civil Rights Museum Freedom Award; and The Jefferson Award for Public Service, which she received along with Supreme Court Justice Ruth Bader Ginsburg.

Marlo is the National Outreach Director for St. Jude Children’s Research Hospital, which was founded by her father, Danny Thomas, in 1962. After his death, she became the face and voice of St. Jude; and in 2004, she created the hospital’s annual Thanks and Giving campaign, a national holiday fundraising and awareness program that has raised more than one billion dollars to date. In 2014, in recognition of her commitment to the hospital, St. Jude christened its newest building The Marlo Thomas Center for Global Education and Collaboration.

Marlo began 2021 with a bang. In February, she launched her own line of unique tabletop settings in partnership with home furnishings giant Williams Sonoma. Tapping into Marlo’s renown as the consummate hostess, Williams Sonoma invited her to recreate dozens of the unique pieces she has discovered over decades of world travel, from the porcelain markets in Kyoto, Japan, to the iconic Portobello Road in London. And in March, Marlo and Phil will debut their original podcast series about marriage, “Double Date,” featuring intimate conversations with long-married celebrity couples—from Jimmy and Rosalynn Carter, to Viola Davis and Julius Tennon, to Elton John and David Furnish. The series is based on the couple’s bestselling book, What Makes a Marriage Last, and is produced by Pushkin Industries.

For checklists, resources, and extra goodies from A Well-Designed Business sign up for free here.

Book 1: The Making of A Well – Designed Business: Turn Inspiration into Action

A Big THANK YOU to Today’s Podcast Sponsors:

Kravet has been with me since the beginning of the show and I love them for it! They helped me to build this amazing community.

Please check out Kravet if you’re looking for fabrics, wall coverings, trims and even quick ship furnishings. Go to Kravet.com and use coupon code AWDB10 – You’ll love their excellent service and your clients will appreciate the Kravet quality for years to come.